The Blues Is Alright 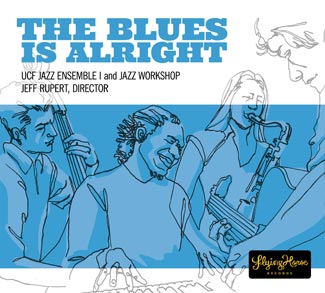 “Jazz is alive, and you can study it in Orlando, Florida.”

With The Blues is Alright, these young performers pay tribute to musicians of the past. They also contribute to the jazz legacy with three original songs.

The opening track “Souls Valley” features the great sax solo originally heard on Sonny Stitt and the Top Brass. Pianist James Navan transcribed Stitt’s solo as an exercise before expanding it to a big band arrangement.

Director Jeff Rupert transcribed “Cuban Fantasy” with the encouragement of Mike Mossman, a former Machito band member. The piece “Giant Steps” was arranged for the late James Moody’s performance at UCF. Jazz great Sam Rivers’s contribution to arts in Central Florida is honored with a rendition of his track, “Vortex.”

“The Blues is Alright” was the band’s closing number for the concert season. Little Milton’s blues classic reminds us that music is essentially about performing together and that, no matter how complex the music may seem, it simply comes down to playing a melody.